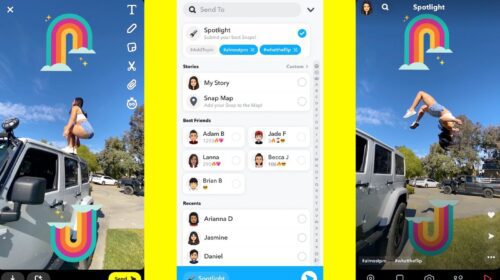 Snapchat was launched in circa 2012 with the objective of communicating a full range of emotions through images. May years later, it has a range of features built around conversations originating from visual imagery. Although Snapchat has always been counted among the top social media apps with approximately 230 million daily active users across the world, it has never witnessed a moment of meteoric rise as other apps including Instagram and TikTok. As TikTok’s popularity now appears to be headed towards a downfall, other apps are integrating the vertical video feed. After Instagram introduced Reels last week, Snap Inc. is now seen testing vertical swiping to navigate between videos on the Discover feed.

Already, we’ve seen Facebook roll out new, TikTok-like apps and features, Instagram’s added a new function which it has admitted is its effort to fend off competition from TikTok, while YouTube is also testing out a new, short-form-set-to-music format to combat the trend. Even Byte, which is now welcoming TikTok users into its fold as they seek to diversify their online presence, is adding TikTok-style features to cater to usage trends.

And now, Snapchat also appears to be jumping aboard the TikTok replication train.

Traditionally, while Snapchat has been the source of inspiration for design changes on other social media apps, the vertical swiping gestures that made TikTok incredibly popular and hypnotic is now being borrowed by Snapchat.

Snapchat’s new implementation for scrolling can be seen for publically available in the Discover feed and will currently exclude Stories from friends. Users can also exit the full-screen view by swiping left or right, unlike Stories where the gesture is used to go from one story to another.

The first was first reported by Twitter user @artb2668. In one image, the user shares a screenshot of the instructions for swiping while the next tweet in the thread has a video to exemplify how the swiping navigation works.

There is a video of the update (sorry for the bad quality I record it with my phone) pic.twitter.com/gFZXlMFBBJ

“We’re always experimenting with new ways to bring immersive and engaging content to our mobile-first Snapchat community,” Snap Inc. told TechCrunch without revealing many details. The company did admit that the feature is currently being tested for a small group of users.

ByteDance’s TikTok, which has acquired around 800 million daily active users, is going through a rough phase of trust deficit. After government-ordered restrictions in India, TikTok faces the possibility of also being banned in the U.S., Hong Kong, and Australia and this may prove to another chance for competitors like Snapchat to bounce back.

It’s no surprise, then, that Snapchat would want to do the same among its own user base, as well, given that the TikTok U.S. audience could be soon up for grabs.

The test also shows how influential TikTok has become in terms of dictating the social app user experience. Where Snapchat once had its concept for short-form Stories stolen by nearly every other social app, including most notably Instagram, it’s now the swipeable TikTok vertical feed that everyone is copying.