Microblogging site Twitter has reported a net loss of $645m (£396m) for 2013, just three months after its flotation on the New York Stock Exchange.

The loss was expected by analysts, who highlighted Twitter’s revenues, which rose 110% last year to reach $665m.

But a reported slow growth in user numbers was a bigger concern for investors.

Twitter averaged 241 million monthly users in the last quarter of the year, up just 3.8% on the previous quarter.

The classic example is Satya Nadella, the new head of Microsoft. He used Twitter in 2010, then gave up for four years, and now is using it because he thinks it’s the way to communicate now he’s the chief executive”

That represents a slowdown compared with a growth rate of 10% seen at the beginning of 2013.

Timeline views were down nearly 7%, suggesting users were refreshing their feeds less often.

“What this report will do is it will question how mainstream is Twitter as a platform,” said Arvind Bhatia, an analyst at Sterne, Agee & Leach.

Shares fell as much as 12% in after-hours trading on Wednesday.

Stuart Miles, CEO of founder of the technology website Pocket-lint.com said: “Apart from professionals like journalists, the typical user gets on to Twitter, messes around, doesn’t quite get it, leaves it a while and then comes back a year or two later. But that translates into very slow growth.

“The classic example of this is Satya Nadella, the new head of Microsoft. He used Twitter in 2010, then gave up for four years, and now is using it because he thinks it’s the way to communicate now he’s the chief executive,” he added.

Nate Elliott, an analyst at research firm Forrester, told AFP: “If you don’t have an engaged user base, you don’t have a business. They have got to do better on users, that is the entire story.”

Twitter’s share price had more than doubled in value since the company was floated on the stock market in November, when it was valued at around $18bn. 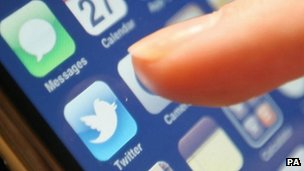 Twitter says 75% of its advertising revenues comes via mobile platforms

But opinion has been divided on whether the company can deliver returns to investors.

Twitter said it was improving its “overall user experience” by launching enhancements like custom timelines, and the ability to send and receive photos via direct message.

But it also pledged to continue to improve its services to advertisers in the hope of growing revenues further.

More than 90% of its revenues in the last quarter came from advertising, where advertisers pay to have their tweets promoted and appear in users’ feeds.

Three-quarters of advertising income comes from mobile platforms like smartphones, the company said. Adapted from bbc