Barely a year after Microsoft paid $9.5 billion for Nokia’s handset unit, the company says it has lost $7.6 billion of that value. That’s equal to about 95 percent of what Microsoft paid for the assets, excluding the cash that came with them. Along with a hefty writedown, Microsoft plans to cut as many as 7,800 jobs, many of them related to the purchase of the Finnish mobile phone maker. Reports Bloomberg

“I am committed to our first-party devices including phones,” Satya Nadella, Microsoft’s current CEO, wrote in an email to employees about the moves. “However, we need to focus our phone efforts in the near term while driving reinvention. We are moving from a strategy to grow a standalone phone business to a strategy to grow and create a vibrant Windows ecosystem that includes our first-party device family.” Reports Mashable

1. Bubbly investments in the dot-com era

During the frenzy of the late-1990s and early 2000s, Microsoft made a series of bad bets that added up to an exceedingly big number. After taking a $5 billion stake in AT&T as well as investments in European telecom providers, Microsoft took $9.1 billion in impairments during its fiscal 2001 and 2002. Chasing Internet and cable glory in the bubble years, Microsoft had poured billions into companies planning to hawk broadband services, interactive television, and satellite, many of which went belly up or were massively scaled back. When the dust cleared, Microsoft’s portfolio was worth little, and the chastened company was much more careful with where it took stakes.

Biggest destruction of value? The 2012 writedown of Internet advertising company AQuantive saw Microsoft’s $6.3 billion purchase in 2007 practically evaporate. The charge totaled $6.2 billion, or 98 percent of the acquisition price. At least that decline in value took five years. Nokia wins for the speediest. 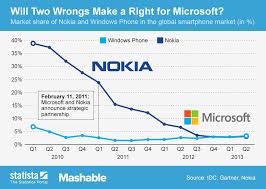 Microsoft wrote down more than $1 billion in 2007 associated with Xbox 360 warranties. The machines had become afflicted with what became known as the Red Ring of Death, which rendered the hardware effectively useless.

Malfunctioning video game consoles wasn’t the only hardware writedown for Microsoft. In 2013, the company took a $900 million charge for unsold inventory of its Surface tablets. Computer-wielding dancers weren’t enough to save this product.