Facebook Inc. FB +1.13% agreed to buy messaging company WhatsApp for $19 billion in cash and stock, a blockbuster transaction that dwarfs the already sky-high prices that other startups have been able to recently command.

The 55-employee company, which acts as a kind of replacement for text messaging, has seen its use more than double in the past nine months to 450 million monthly users. That makes its service more popular than Twitter Inc., TWTR -4.61% the widely used microblogging service which has about 240 million users and is currently valued at about $30 billion.

The transaction, which includes $3 billion in restricted stock units to be granted to WhatsApp’s founders and employees over four years, ranks as the largest-ever purchase of a company backed by venture capital. 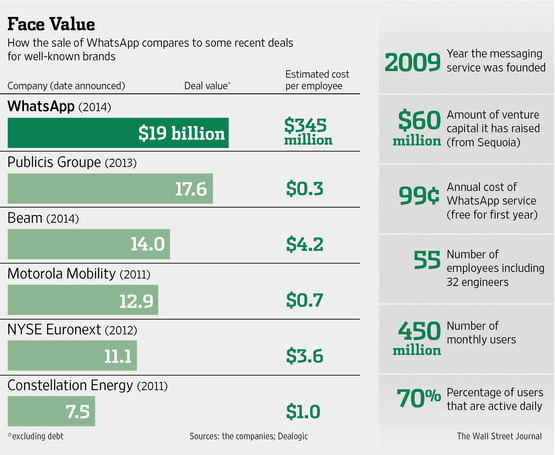 Besides making its founders billionaires, the deal marks an enormous windfall for Sequoia Capital, the only venture firm that backed WhatsApp. Sequoia invested about $60 million for a stake valued at up to $3 billion in the deal, according to a person familiar with the matter.

The deal price also easily outranks any acquisition of startups in recent years, including Facebook’s purchase of photo-sharing app Instagram for more than $1 billion in 2012, and, a year earlier, Microsoft Corp.’s $8.5 billion buy of video-calling company Skype.

What isn’t clear is how much revenue WhatsApp makes—the company declined to comment on its sales. It charges 99 cents a year after one year of free use and doesn’t carry ads. On a conference call, Facebook Chief Executive Mark Zuckerberg said he doesn’t think ads are the right way to monetize messaging systems.

Beyond revenue, the deal could help shelter the social network against the shifting tastes of teen users, some of whom have grown cool to it, and bolster its position internationally. WhatsApp is particularly popular outside of the U.S.

The transaction comes in the wake of Facebook’s failed attempt to purchase another messaging service popular with younger users, Snapchat, for roughly $3 billion last year.

WhatsApp has long been seen as a takeover target for Internet giants. Google Inc. had reached out to buy the company several years ago, two people familiar with the situation said, while two other people said deal talks between the two companies also took place recently. A Google spokesman declined to comment.

Even by the get-big-fast standards of Silicon Valley, WhatsApp’s story is remarkable. The company, founded in 2009 by Ukrainian Jan Koum and American Brian Acton, reached 450 million users faster than any company in history, wrote Jim Goetz, a partner at investor Sequoia Capital.

Facebook had fewer than 150 million users after its fourth year, one third that of WhatsApp in the same time period.

WhatsApp processes 50 billion messages a day, Mr. Goetz wrote, yet has only 32 engineers and doesn’t employ any marketing or public-relations people.

WhatsApp built its business on the idea of offering instant messaging without the fees that carriers often charge. The app lets uses send text, pictures and video to anyone with the software, free. Unlike Apple Inc.’s iMessage, it works on all the major mobile operating systems.

The company goes out of its way to remain private, offering little in the way of information to government agencies trying to track people. Once delivered, messages are deleted from the company’s servers. Privacy was particularly important to Mr. Koum, who grew up in a communist country with a secret police.

“Jan’s childhood made him appreciate communication that was not bugged or taped,” Mr. Goetz wrote. “When he arrived in the U.S. as a 16-year-old immigrant living on food stamps, he had the extra incentive of wanting to stay in touch with his family in Russia and the Ukraine.”

The deal came together in less than two weeks, though Messrs. Zuckerberg and Koum first met nearly two years ago.

Mr. Zuckerberg first reached out to Mr. Koum via email in the spring of 2012, according to a person familiar with the matter. A month later, the two men met at a coffee shop in Los Altos in Silicon Valley. Following their initial meeting, Messrs. Zuckerberg and Koum talked regularly, sometimes at dinner and on hikes.

Mr. Koum, who previously spent about a decade at Yahoo Inc. as an engineer, will join Facebook’s board of directors.

The demographics of WhatsApp’s users were likely a draw for Facebook, said Rebecca Lieb, analyst at Altimeter Group. “This is clearly also a play at securing their base of younger users who are married to text messaging,” she said.

Equally enticing is the percentage of WhatsApp users who log onto the service at least once a day. That figure sits at 70%, even higher than Facebook’s 61%.

Such “engagement” percentages are valuable because the more users interact with a service, the more ads or other products can be sold to them.

On a per-user basis, Facebook is paying around $40 apiece for WhatsApp, roughly in line with the amount that other social media companies that have been acquired in recent years.

WhatsApp, based in Mountain View, Calif., will stay in its headquarters and continue to operate independently of its new parent company, which is based nearby in Menlo Park.

Other figures disclosed in a Securities and Exchange Commission filing show metrics that made it particularly attractive to Facebook. WhatsApp users every day upload 600 million photos, for example, and send 100 million video messages every day.

On the conference call, Messrs. Zuckerberg and Koum said it was important the company operate separately and retain the mentality of a startup, a strategy Mr. Zuckerberg said has worked with Instagram.

Instagram founder Kevin Systrom, he said, has “gotten a huge amount of value on being able to use Facebook infrastructure,” while remaining separate.

WhatsApp, despite its surging popularity in recent years, has been wary of raising capital and entertaining suitors. Mr. Koum told The Wall Street Journal last December that WhatsApp has “no plans to sell, IPO, exit,” or get new funding.