CIO East Africa has been following Bekele’s work for many years now and so did we, at ITBusinessdirect.  No wonder the influential Business and Tech News Magazine in its May Issue 2017 decided to lay out a two page  spread and a cover note on this impressive Women-In-Tech and “her significant contribution to her field” entitled “MEET SOPHIA BEKELE – Industry Trailblazer and Internet Governance Pioneer”.

True enough, Bekele’s career reads as one that simply picks up and champion the most challenging causes that society has neglected or that have been marginalized by the Elites of the world.  She seem to do so with ease, a smile and attention to detail that most would have given up before they start.

Indeed Bekele courageously trailblazes her way into her causes and somehow – an industry is created – where many follow to benefit.  Be it tackling the gap in the digital divide in Africa through building large scale IT infrastructures for governments when it was most needed, to global causes on policy gaps she sees on marginalized groups such as global language groups, or the abandoned resources of the internet economy the .africa domain she initiated and campaigned for to be done, and/or to her passion for women’s equal participation in the economy, Bekele has done it all, and continues to change the Social, Economic and Political landscape and dynamics in Africa and the world.

Indeed, “MEET SOPHIA BEKELE” as the CIO East Africa exhibits her true talent, passion and accomplishments.  Below is the full coverage [PDF]. 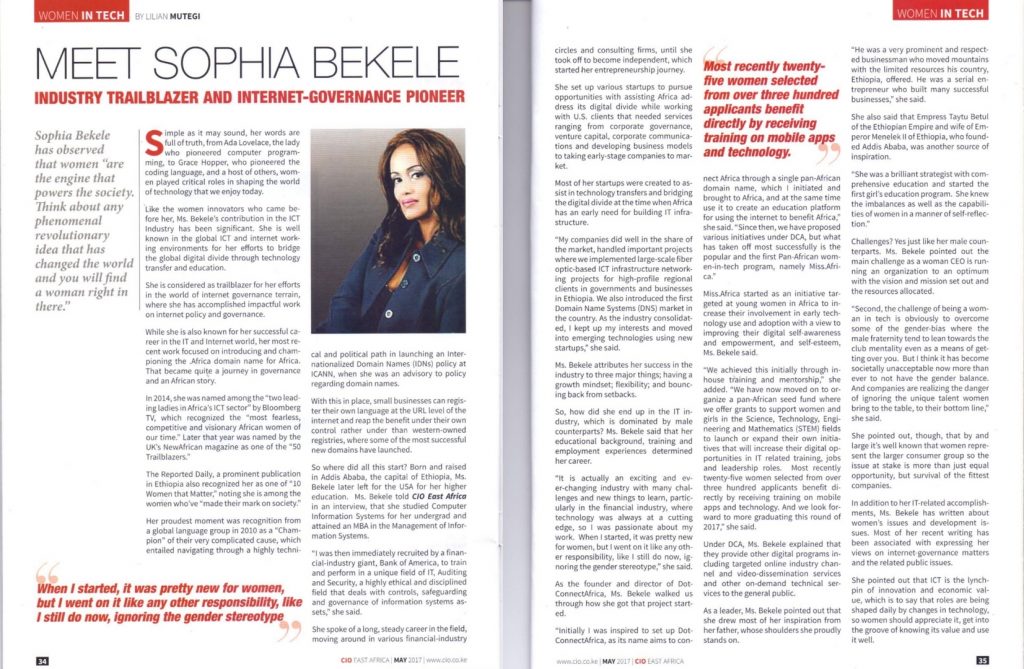 So where did all this start? Born and raised in Addis Ababa, the capital of Ethiopia, Ms. Bekele later left for the USA for her higher education. Ms. Bekele told CIO East Africa in an interview, that she studied Computer Information Systems for her undergrad and attained an MBA in the Management of Infor­mation Systems.

“I was then immediately recruited by a finan­cial-industry giant, Bank of America, to train and perform in a unique field of IT, Auditing and Security, a highly ethical and disciplined field that deals with controls, safeguarding and governance of information systems as­sets,” she said.

She spoke of a long, steady career in the field,   moving around in various financial-industry circles and consulting firms, until she took off to become independent, which started her entrepreneurship journey.

Most of her startups were created to assist in technology transfers and bridging the digital divide at the time when Africa has an early need for building IT infra-structure.

“My companies did well in the share of the market, handled important projects where we implemented large-scale fiber optic-based ICT infrastructure networking projects for high-profile regional clients in governments and businesses in Ethiopia. We also introduced the first Domain Name Systems (DNS) market in the country. As the industry consolidated, I kept up my interests and moved into emerging technologies using new startups;’ she said.

Ms. Bekele attributes her success in the industry to three major things; having a growth mindset; flexibility; and bouncing back from setbacks.

So, how did she end up in the IT industry, which is dominated by male counterparts? Ms. Bekele said that her educational background, training and employment experiences determined her career.

“It is actually an exciting and ever changing industry with many challenges and new things to learn, particularly in the financial industry, where technology was always at a cutting edge, so I was passionate about my work. When I started, it was pretty new for women, but I went on it like any other responsibility, like I still do now, ignoring the gender stereotype;’ she said.

As the founder and director of DotConnectAfrica, Ms. Bekele walked us through how she got that project started.

“Initially I was inspired to set up DotConnectAfrica, as its name aims to connect Africa through a single pan-African domain name, which I initiated and brought to Africa, and at the same time use it to create an education platform for using the internet to benefit Africa;‘ she said. “Since then, we have proposed various initiatives under DCA, but what has taken off most successfully is the popular and the first Pan-African women in tech program, namely Miss.Africa.”

Miss.Africa started as an initiative targeted at young women in Africa to increase their involvement in early technology use and adoption with a view to improving their digital self-awareness and empowerment, and self-esteem, Ms. Bekele said.

“We achieved this initially through in-house training and mentorship,” she added. “We have now moved on to organize a pan-African seed fund where we offer grants to support women and girls in the Science, Technology, Engineering and Mathematics (STEM) fields to launch or expand their own initiatives that will increase their digital opportunities in IT related training, jobs and leadership roles. Most recently twenty-five women selected from over three hundred applicants benefit directly by receiving training on mobile apps and technology. And we look forward to more graduating this round of 2017,” she said.

Under DCA, Ms. Bekele explained that they provide other digital programs including targeted online industry channel and video-dissemination services and other on-demand technical services to the general public.

As a leader, Ms. Bekele pointed out that she drew most of her inspiration from her father, whose shoulders she proudly stands on.

“He was a very prominent and respect-ed businessman who moved mountains with the limited resources his country, Ethiopia, offered. He was a serial entrepreneur who built many successful businesses,” she said.

She also said that Empress Taytu Betul of the Ethiopian Empire and wife of Emperor Menelek II of Ethiopia, who founded Addis Ababa, was another source of inspiration.  “She was a brilliant strategist with comprehensive education and started the first girl’s education program. She knew the imbalances as well as the capabilities of women in a manner of self reflection.”

“the main challenge as a woman CEO is running an organization to an optimum with the vision and mission set out and the resources allocated.

“Second, the challenge of being a woman in tech is obviously to overcome some of the gender-bias where the male fraternity tend to lean towards the club mentality even as a means of get-ting over you. But I think it has become societally unacceptable now more than ever to not have the gender balance. And companies are realizing the danger of ignoring the unique talent women bring to the table, to their bottom line;’ she said.

She pointed out, though, that by and large it’s well known that women represent the larger consumer group so the issue at stake is more than just equal opportunity, but survival of the fittest companies.

In addition to her IT-related accomplishments, Ms. Bekele has written about women’s issues and development is-sues. Most of her recent writing has been associated with expressing her views on internet-governance matters and the related public issues.

She pointed out that ICT is the lynch-pin of innovation and economic value, which is to say that roles are being shaped daily by changes in technology, so women should appreciate it, get into the groove of knowing its value and use it well..